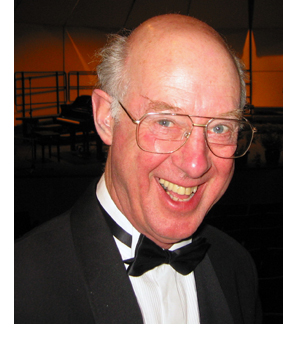 Douglas Heywood, OAM, has been conductor of the Camberwell Chorale since 1974, and of the Camerata Orchestra since 1976. In late 2000 he was also appointed as the Musical Director for the Melbourne Welsh Male Choir.

The Melbourne music community probably knows Doug best as the Choral Director, since 1988, for Channel Nine’s Christmas Eve production of “Carols by Candlelight” at the Myer Music Bowl.

He is also highly regarded for his involvement with young voices as the Music Director of “Joining the Chorus Singers” (formerly, the Victorian State Singers) since its inauguration in 1997. This is an auditioned junior and senior choir selected from students currently attending government schools.

In recognition of his service to Music Education and Community Music, Douglas was awarded the Order of Australia Medal in 1995.

Camberwell Chorale is very fortunate to have Doug’s passionate leadership and exceptional conducting skills to help it produce its challenging program.

Music is the shorthand of emotion.