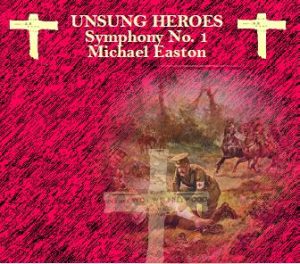 Last performed on 23 August 2015 in recognition of the Centenary of WWI, this Symphony was specifically dedicated by the Composer to Camberwell Chorale and its Musical Director, Doug Heywood.

First written in 1990, at its premiere in 1991 Easton was quoted as saying … “the work would never have been written without the firm but friendly guidance of tonight’s conductor, Douglas Heywood, who is one of Melbourne’s musical treasures!”  After the performance, Easton and Heywood decided to revisit the work at a later date, but it was not until 2004 that plans were actually made to do so, following a trip Easton was then undertaking to England.  Unfortunately, Michael Easton died tragically whilst in England, and that meeting never took place.

Fifteen years after that first performance, the Chorale decided to perform the work again to commemorate the 60th Anniversary of the end of WWII, but most of the orchestral parts and full orchestral score were missing, so from an archival recording of the first performance and some of the remaining parts, Doug Heywood reconstructed and edited the score for that performance!

This work is performed only by the Camberwell Chorale, and its historical relevance and importance are such that Doug Heywood and the Camberwell Chorale have now realised a long-held desire to record Unsung Heroes, the project commencing in 2010 with the recording of the orchestral parts by the Australian International Symphony Orchestra, with solo and choral material included in 2016.

We are extremely proud to release this CD, which is available for $25 per copy plus postage.  Use the form below to order:

If I cannot fly, let me sing.