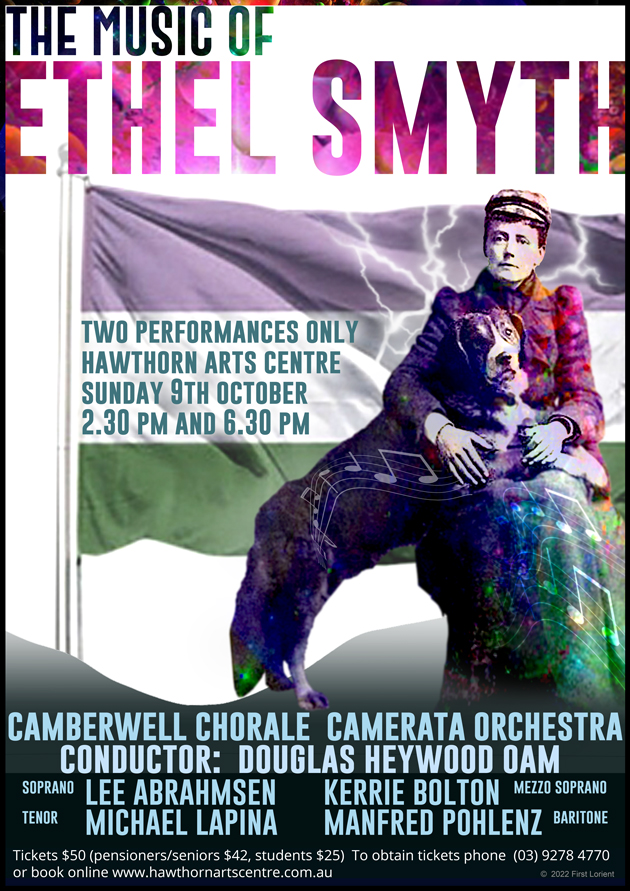 On Sunday 9th October, 2022, the Camberwell Chorale will perform the Australian premiere of Dame Ethel Smyth’s Mass in D, a glorious work first performed at the Royal Albert Hall in 1893. This performance will be accompanied by an audiovisual introduction to this remarkable, yet less well-known English composer, also a member of the women’s suffrage movement.

Two performances will be held at the Hawthorn Performing Arts Centre—at 2.30 pm and 6.30 pm.

Raised during the Victorian age, Smyth fought against societal restrictions that said a woman should not have a profession. As a result, she was the first woman composer to have her opera (Der Wald) performed at New York’s Metropolitan Opera and was heavily involved in the Suffragette movement. Today, she would be heralded as a champion of women’s rights and a pioneer for women in the classical music world, but until recently, she was relatively unknown.

A recent performance of her opera “The Wreckers” at the Glyndebourne Festival was a resounding success. Her “Mass in D Major” will be performed at the Royal Albert Hall in August this year. While you may not be able to attend the concert at the Royal Albert Hall, you can hear her “Mass in D” and two overtures from her opera “The Wreckers” at the Hawthorn Arts Centre on Sunday, 9 October. An opportunity not to be missed!

The soloists for this performance are Lee Abrahmsen, Kerrie Bolton, Michael Lapina, and Manfred Pohlenz.

For more details use our contact form, or Book online

For anyone who books a ticket to The Music of Ethel Smyth until 5pm, Friday 16 September, you will go in the draw to win one of three generously donated Spring hampers from Caffe E Cucina Espresso Bar (Toorak Village, TokH).

The prizes will be drawn on Tuesday 4 October at our choir rehearsal. If you win and aren’t there to collect your prize, we will contact you to organise collection.

Update: The winners are announced here.

The function of music is to release us from the tyranny of conscious thought.

1. Camberwell Chorale, ABN: 31 633 717 882 of 10/47 Riversdale Road, Hawthorn VIC 3122 is the ‘Promoter’ of this activity in support of The Music of Ethel Smyth concerts to be held at the Hawthorn Arts Centre on 9 October 2022.
2. A person making a booking before 5pm AEST on 16 September, will be eligible to enter a random draw for one of three Prizes.
3. Each Prize will consist of a Spring hamper, valued at RRP $250. Total prize pool value is RRP $750.
4. The prize draw will occur on Tuesday 4 October at Hawthorn Arts Centre, VIC between 7:30pm – 10:15pm AEST.
5. The random prize draw will be made through Giga Calculate.
6. Prize winners will be announced during the intervals of each concert. If a winner is not present to take their Prize, the Promoter will contact the winner to organise delivery or collection of the Prize within 28 days.
7. The names of prize winners will be published on the Camberwell Chorale website within two weeks of the prize draw.
8. If a prize is unclaimed, a redraw will be held on Tuesday 1 November between 7:30pm – 10:15pm AEST, again by Giga Calculate.
9. In the event of a prize redraw, the winner/s names will be published on the Camberwell Chorale website within two weeks of the prize redraw, and the winner/s will be provided with their prize within 28 days of the redraw.
10. The promotion will be advertised via the Camberwell Chorale website, emails from the Camberwell Chorale Secretary to the ‘Friends’ email database, the Camberwell Chorale Facebook page and other advertising means as needed.
11. All queries regarding this promotion should be directed to secretary@camberwellchorale.org.au.